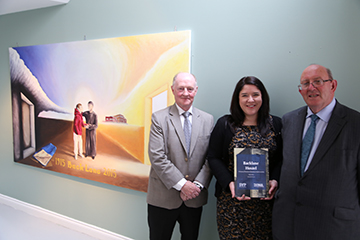 On the 9th May 2015 Dublin’s Backlane hostel celebrated its Centenary, marking 100 years to the day of helping homeless men at Christchurch, Dublin 8.

Backlane Hostel is a 60 bed accommodation service supporting men who are homeless and over the age of 18 who are referred from the Dublin Regional Homeless Executive’s Central Placement Service.

Archbishop Diarmuid Martin celebrated mass in Backlane Hostel today to mark the centenary of the hostel serving homeless men in Dublin. One hundred years ago on 9th May 1915, the then Archbishop of Dublin, Most Rev William Walsh presided at the opening ceremony.

The Backlane hostel has been providing a service to homeless men 24 hours a day, 365 days a year for the past 100 years and in that time thousands of men have passed through its doors.

In November 1925, a street count carried out by the police on a single night found 134 people (116 men and 18 women) sleeping rough (or as it was politely described, “Travelling for Work”).

Backlane Hostel has been managed by Depaul (a separate charity supporting people who are homeless or at risk of homelessness in Dublin and throughout Northern Ireland) since 2002 in partnership with the SVP.

Depaul’s professional staff and volunteers on site aim to provide a welcoming environment supporting people to progress to a positive future. Depaul has a strong and long held commitment to work with some of the most vulnerable people in the sector and works with the SVP in Backlane to support upwards of 400 men per year.

Speaking at the centenary celebration Kerry Anthony, CEO of Depaul said “In the last 13 years, since Depaul took over management of Backlane Hostel, we have supported thousands of men with multiple and complex support needs who are experiencing homelessness. We have continually adapted our service provision in response to changing needs and in accordance with best practice. The need to address access to housing options for people, and housing with support when needed is imperative if we are going to see an end to long term homelessness in Dublin and indeed in Ireland”