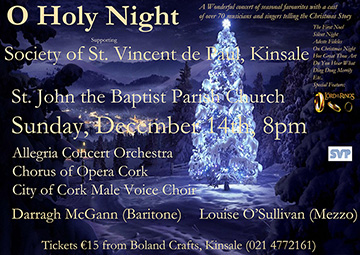 Music lovers are in for a wonderful evening of music when a cast of over 70 singers and musicians combine to present the timeless Christmas Story in Concert – O Holy Night -   in St. John the Baptist Parish Church, Kinsale on Sunday 14th December, at 8 pm.

Conductor Frank Buckley has put together a programme of Christmas music to suit all tastes “We want to ensure that the concert will be enjoyed by everybody, so I have designed a programme of music that will concentrate on popular highlights from the music that we all know and love, with the accent firmly on the great traditional carols”, says Frank, “with a leavening of humorous songs and seasonal favourites.”

The programme will include Christmas Crackers, such as:  O Holy Night, Silent Night, Adeste Fideles , Ding Dong Merrily,  modern classics such as:  Mary’s Boy Child and Do you Hear What I Hear and humourous songs like Grandma Got Run Over by a Reindeer and I Want a Hippotamus For Christmas. A special feature will highlight music from the award winning film trilogy The Lord of the Rings.

Presenting the evening will be the west Cork based Allegria Concert Orchestra.

Soloists for the evening will include Cork’s favourite Mezzo Louise O’Sullivan along with Darragh Mc Gann, Cobh’s own singing taximan. Darragh, who recently appeared on The Voice and Britain’s Got Talent is the possessor of a lovely lyrical Baritone voice. Together, they will complement the two magnificent choruses of the Chorus of Opera Cork and the City of Cork Male Voice Choir.

A feature of the Concert will be the narration of Orchestra Leader Kevin Goggin who in true Andre Rieu style will guide the listeners through the narrative of the Christmas Story as told in the music.