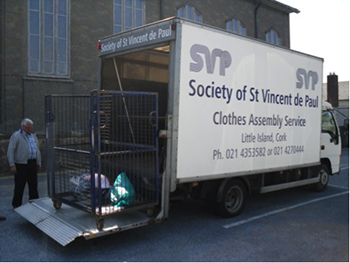 Last year was the busiest year our members have ever seen, we started the year looking after 5,000 families each week across the city and county.

Our regional office in Tuckey Street received another 19,154 calls for assistance over the year, not all of them would result in continuous weekly calls, many would be enquiries for one thing or another or indeed SVP might not be the best organisation to deal with the problem and we would refer them on.

The year went well enough for us until December and that awful mess with CRC in Dublin. Our December church gate collection dropped by 20%. The Thursday before Christmas, for the first time we can remember, we ran out of toys and food, help simply stopped coming in. I think people just had enough of charities and lost all trust in us.

We were lucky the Evening Echo, C103FM and 96FM came to our aid with 96fm actually donating €500 on air, but more importantly they gave us a platform to explain our position to the public and I do so now again. Yes it’s true some charities use up to 80% of their income on administration costs. Last year SVP used just 12% that is 12 cents from every euro given. I would like to explain to each of you, if you join SVP it will cost you actual cash each week. At each meeting a collection is made to help with the running costs of the organisation.

This collection is called the “Secret Bag” and really it’s no secret at all. It is usually not a bag either. It could be a hat or an envelope handed around to the members. Over the years, I have seen the odd €50 or €10 being contributed, but it is usually a modest 50c up to €2 or €3 per member. We have 1,200 members

in Cork and even if each member contributed €2 per week there would be at least €2,400 per week donated by the members/volunteers to defray the running costs of the Society of St Vincent de Paul in Cork. Of course accountants calculate this as income — this money is banked and helps towards paying

our six administration staff, electricity and heating costs, Insurance etc. and then we are told we have used 12% of our income on administration costs.

All our members are volunteers from all walks of life, giving their spare time to the work of the society. Many of the members I know have worn out over a lifetime, a dozen or more pairs of shoes walking the streets at night, many a tyre on a car has been changed driving around the country and city roads, all paid for by the members themselves.

These are simple cold facts and we are not looking for thanks, we are not asking you to give more — we know you have always given what you can afford. I am very conscious of the hundreds, yes hundreds of people who over the years, when putting money in the box say “thank you” to the person standing there holding the box — its extraordinary but true. What I am asking is that you stand back and think, don’t rush to pass judgement of us and all other charities. Yes, there are some bad apples in the barrel, but let us not empty or throw out the barrel.

A friend is not someone who says “I hear you are in trouble” and disappears. A friend is someone who asks what they can do to help and sticks around to make a difference. You and those who have gone before you, have stood by the poor and the marginalised and made a difference! You have been true friends — please don’t walk away now.

Wishing you all a peaceful year.