Over 140,000 children living in substandard and poor-quality homes 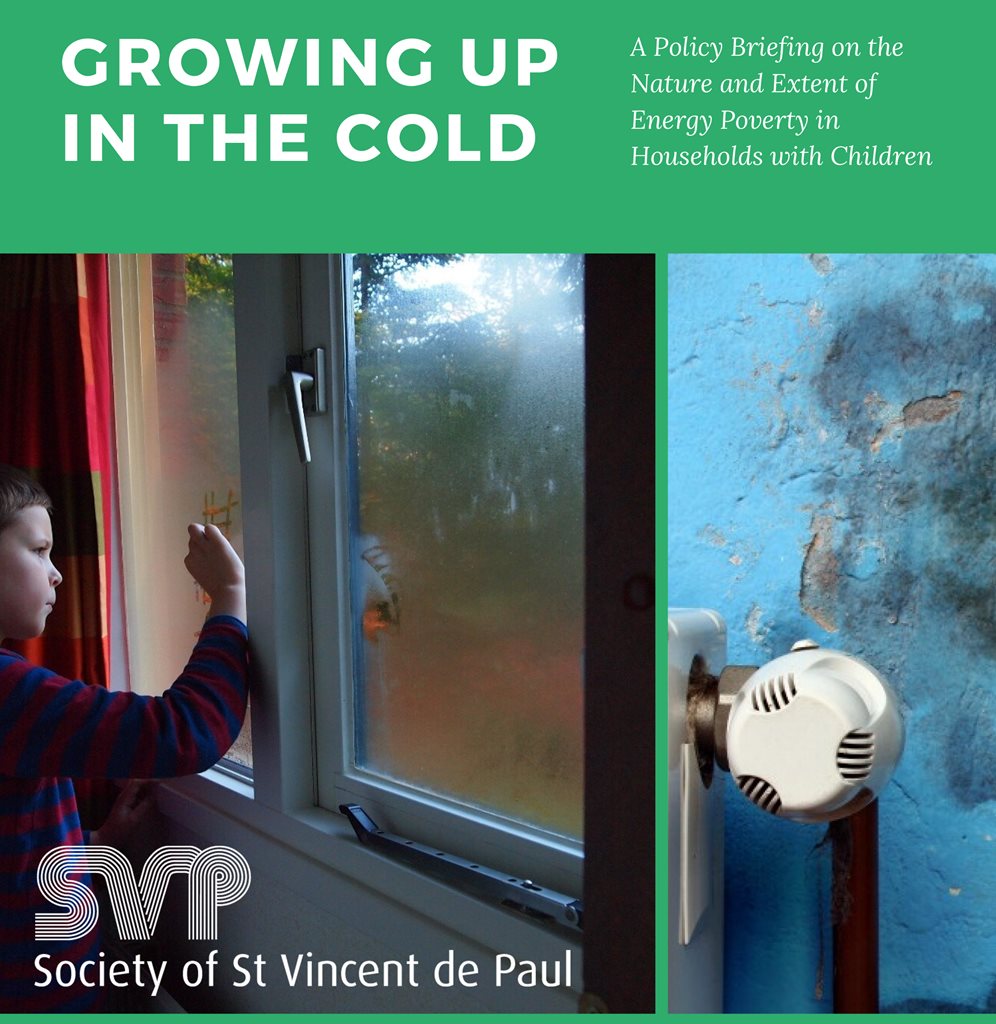 In addition, to the almost 4,000 children currently living in emergency accommodation there are another 140,000 (12.3% of children in Ireland) living in homes with a leaking roof, damp walls, or floors.

And over half of the poorest children in families reliant on social welfare are not in receipt of the Fuel Allowance.

The figures are contained in a new report from the Society of St. Vincent de Paul (SVP), entitled Growing up in the Cold.

Analysis of data from a sample of 9,000 five-year-old children shows that living in an inadequately heated home is linked to an increased risk of asthma and more frequent antibiotic use in young children. These risks are distinct from the risks of poor health associated with low income and deprivation more generally.

“This report clearly shows that children are one of the groups most exposed to the risk of energy poverty and that growing up in a cold home has a distinct negative impact on a child’s health. The findings suggest that policy levers to alleviate energy poverty and improve the quality of the housing stock will lead to significant health benefits and a reduction in health expenditure in the future”, said Dr. Tricia Keilthy, SVP Head of Social Justice.

The report brings together analysis of the European Survey of Income and Living Conditions and the Growing up in Ireland Study, to provide comprehensive information on the extent and nature of energy poverty in households with children.

Some of the main findings include: 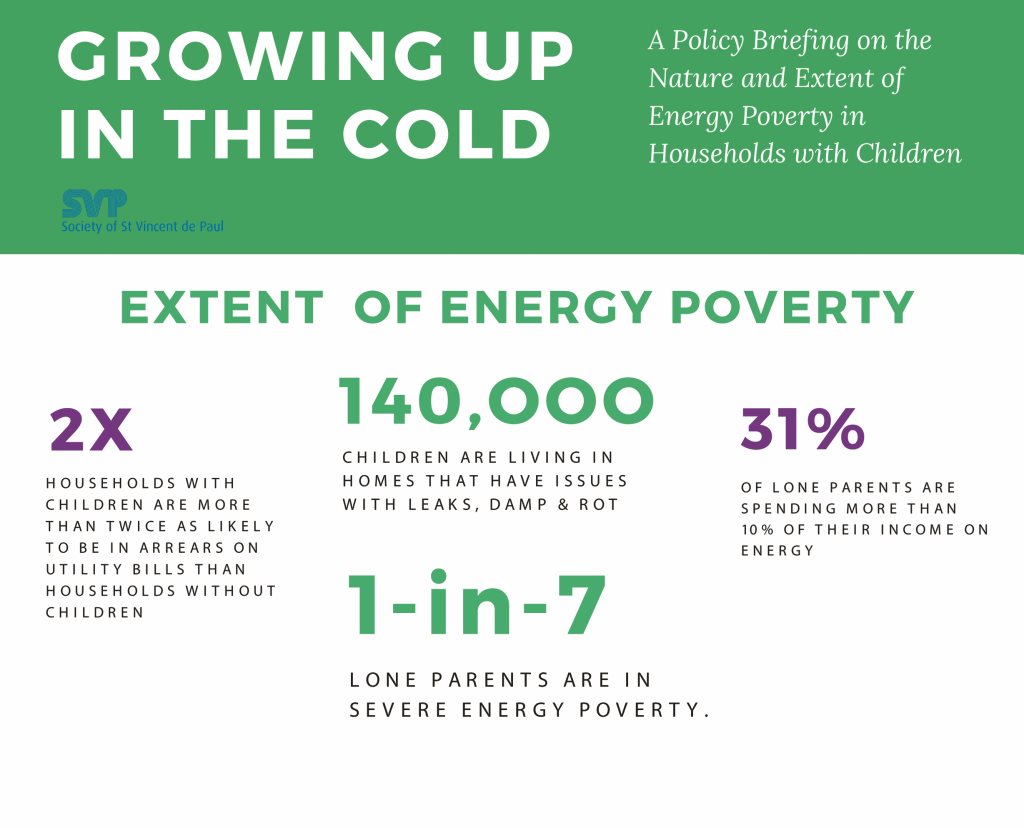 Five-year olds living in energy poor homes had an increased risk of asthma (10% compared to 8%) and to have had two or more courses of antibiotics in the past twelve months (38% compared to 24%). The differences were statistically significant and remain when controlling for a wide range of family and household characteristics.

SVP spent more than €5 million helping people with the cost of energy in 2018 - an increase of 20% on the previous year.  The Society expects to receive over 50,000 calls for help this winter, many from families struggling to pay the bills and keep their homes warm.

SVP National President, Kieran Stafford said; “Over the next few weeks and months, SVP will be visiting families who dread wintertime because they find it impossible to heat their homes. Our volunteers will meet families trying to cut down on bills by living in one room of the house during the winter months. Others will be sitting in the cold and dark because they have nothing left at the end of the week to top up their pre-pay meter.”

The Warmer Home Scheme, which is a free energy efficiency scheme available to social welfare recipients who own their own home, received additional funding in Budget 2020. The Fuel Allowance was also increased.  While these enhanced supports are welcome, SVP says current policies and schemes are failing to effectively target children experiencing energy poverty and many families won’t be compensated for the carbon tax increase. 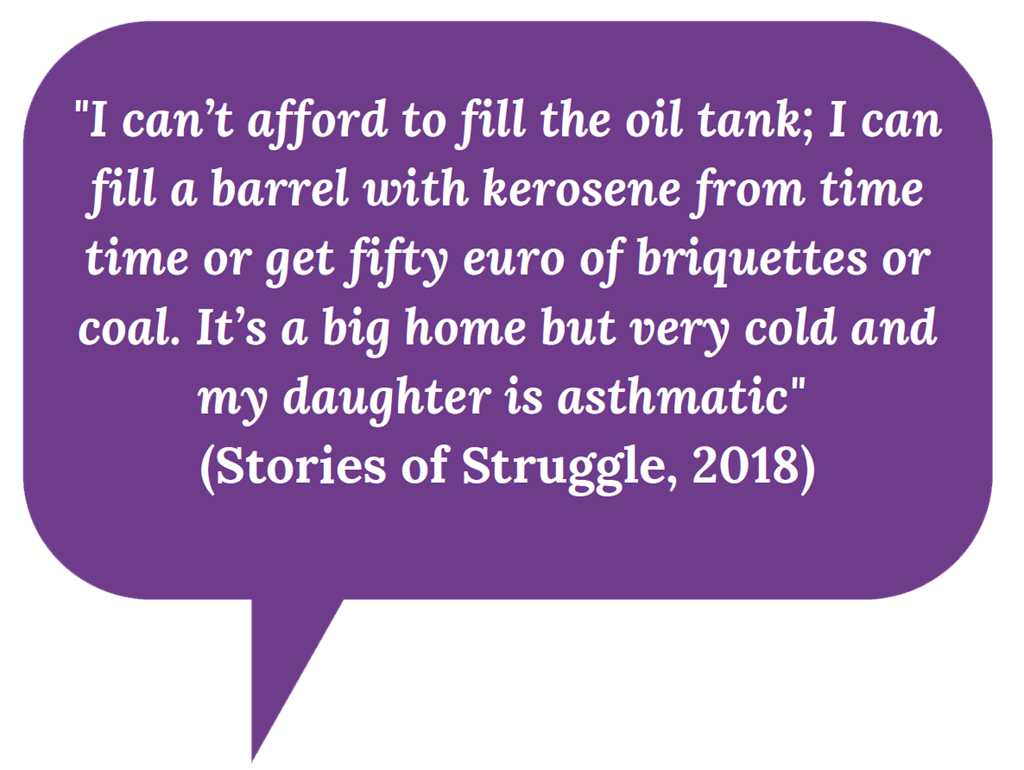 “The Warmer Home Scheme may be a good option for older people who own their own homes but for energy poor households with children, it is more likely they are living in social housing or the private rented sector. Given tenure type is a distinct risk factor for children's exposure to energy poverty, investing in measures to upgrade the stock of social housing and private rented accommodation needs to be a priority.” said Dr. Keilthy.

SVP welcomed the publication of the consultation on improving energy efficiency in the private rental sector by the Department of Communications, Climate Action and Environment and the charity will submit a detailed response in early January 2020. 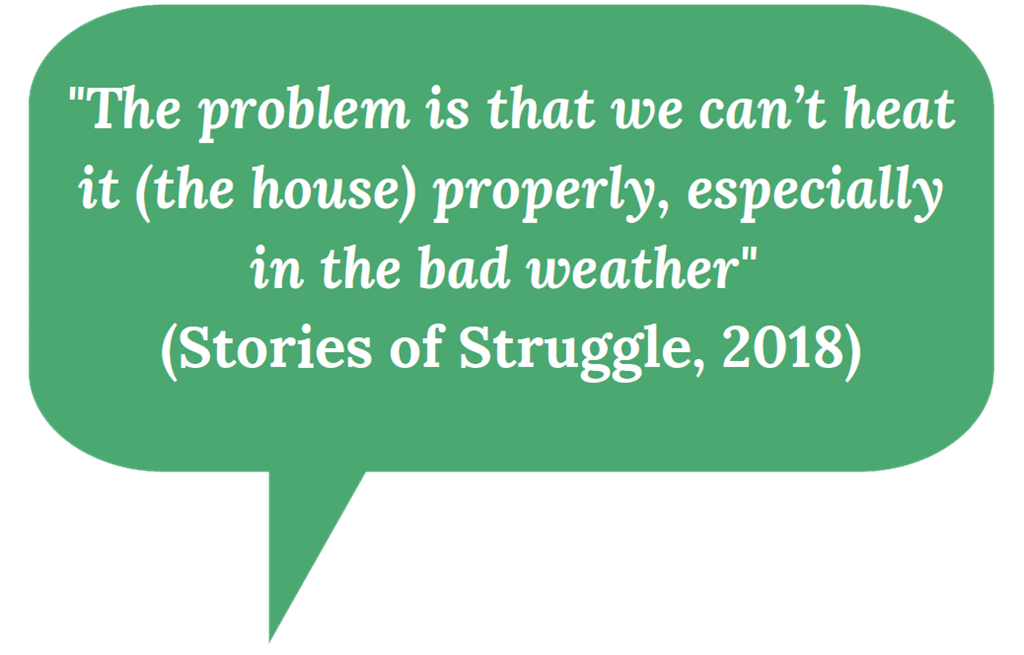 “As the current Strategy to Combat Energy Poverty comes to an end this year, there is an opportunity to develop a new set of policy responses that will effectively reduce children’s exposure to the negative impacts of growing up in energy poor homes. New initiatives and measures should be incorporated into the Climate Action Plan and be rooted in a solid understanding of children’s experiences of living in energy poverty and poor housing” she concluded.

The SVP report outlines a number of recommendations including a deep retrofit programme of local authority housing, a Government strategy to introduce minimum energy efficiency standards into the private rental sector with a target of ensuring all properties reach a C grade or higher by 2030, a pilot of Community Energy Advisors, and a feasibility study on the introduction of social tariffs into the Irish energy market.