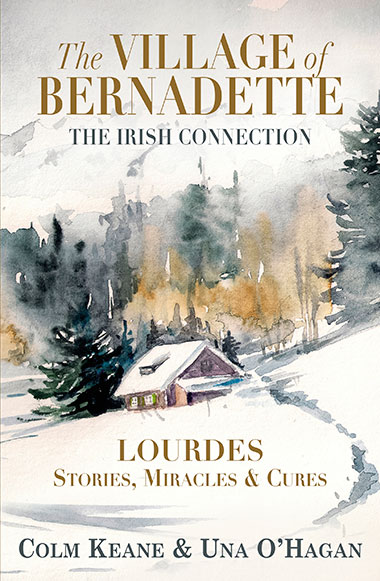 An excerpt from the book “The Village of Bernadette” by Colm Keane & Una O’Hagan, to be published in late September

The story of the Ozanam Pilgrimage of 1939 is recalled in a new book written by authors Colm Keane and Una O’Hagan. An Irish pilgrimage to Lourdes, organised by the St. Vincent de Paul Society, was lucky to escape from France before hostilities commenced at the outbreak of World War II.

An eight-month-old girl was among 66 Irish invalids, including seven stretcher cases, who made a hasty escape from Lourdes in late August 1939. The pilgrimage they were part of – organised by the St. Vincent de Paul Society – faced being trapped in France as the country prepared for imminent war. With the army being mobilised, and trains about to be commandeered, it was feared that the 400-strong party might be pinned down in the country. Advice was issued to get out of Lourdes – indeed, get out of the country – and do so fast.

It was obvious to the Irish pilgrims that the atmosphere around them was darkening, and darkening quickly. Private overseas telephone communications were suspended, while strict rules were introduced requiring telegrams to be in plain language and not in code or cipher. The press was about to be censored. Exporting maps from the country was banned, especially those used by the army or identifying the position of factories, mines or train lines. France’s first and second division soccer matches were cancelled for the weekend. Trouble was certainly afoot, and it was time to get out.

The pilgrims, who had left Dublin on Monday, 21 August, departed Lourdes on Sunday, 27 August, just as wartime contingency plans were being put in place. As they sped through the French countryside, the rail network and borders around them were closing down. The Italians had just shut their frontier with France. Plans were in place to seal off the French border with Germany. The pilgrims were like animals being caught in a net, their escape options gradually narrowing, and their hopes of making it home diminishing with the passage of each mile.

As their train hurried through the French landscape, the 400 Ozanam pilgrims were cared for by 22 priests, two doctors and a group of nurses. They sang the Ave Maria and Salve Regina as they scurried along. The priests held an hour of prayer in each train compartment, to compensate for the Holy Hour which the pilgrims were missing at Lourdes. Back home, Radio Éireann broadcast an emergency announcement asking relatives to make their way to Dun Laoghaire, to meet the boat. Everything was heading towards a safe arrival, but there was still some distance to go.

The pilgrims reached Calais after a tense 22-hour non-stop train journey. There was mayhem at the port, with businessmen and holidaymakers rushing for home. Long queues had formed for the cross-channel steamers, with passengers waiting several hours before being allowed on board. Boats were densely packed, and a large number of travellers had to stand during the crossing. The Golden Arrow train service, via Calais, was crowded to capacity. Even air services were completely booked up, with wealthy travellers who asked for special planes being told that owing to the European situation no machines were available.

Having eventually crossed from Calais to Dover, the pilgrims were brought by special train to Holyhead, and then ferried home. When they arrived, they ‘looked well, if tired,’ one reporter noted. It was by the skin of their teeth that they had made their escape. Within 72 hours of their return, German aircraft bombarded Poland. Forty-eight hours later, Britain and France declared war on Germany. The next scheduled Irish pilgrimage – organised by the Catholic Young Men’s Society – was cancelled, ‘owing to the present international situation,’ their executive committee explained.

Pilgrimages to Lourdes dried up following the outbreak of war in September 1939. Although located in what was initially unoccupied France, international pilgrimages ceased completely. It also proved impossible for pilgrims to travel from the German occupied regions in the north and west. Later in the war, when the Germans also occupied the south, including Lourdes, the number of internal French pilgrimages picked up somewhat, although there were still no visits from overseas.

It wasn’t until 1947 that Irish pilgrimages to Lourdes once again took place. Even at that stage, conditions were grim. Compared to the 25 special trains which were at the disposal of pilgrims in pre-war days, only one or two trains were now available. Night-long queues for seats formed at railway stations, and overcrowding was commonplace. The authorities requested that only invalids ‘who can travel sitting up’ should make the journey.

‘Thousands of pilgrims have come by foot, bicycles, carts or in packed trains,’ a special correspondent with The Irish Press wrote from France. ‘In addition to those able to find accommodation in hotels and boarding houses, thousands more are being accommodated in large dormitories in hospitals, convents and wooden huts. Two hundred tons of flour, 50 tons of macaroni, thousands of tins of sardines and condensed milk have been sent to Lourdes to help feed the pilgrims, all of whom have been asked to bring extra food.’

Prospective travellers were worried. One letter writer to The Irish Press asked if she should bring condensed milk, and wondered how long it would last in a screw-topped jar. Bring it, she was informed, but bring it in a tin, employ a tin-opener while there, and use it as required. Be aware, she was told, that ‘hotels expect you to provide one tin per person, as there is no milk to be got there. Also, if one likes the odd cup of tea that one can get made in a café, it would be advisable to give the proprietor a tin to be used as desired.’

The good news was that the first post-war Irish pilgrimage was organised by the Catholic Young Men’s Society – the very same group whose 1939 trip was cancelled at the last moment due to the outbreak of war. Because of travel complications, the tour was restricted to ‘invalids only.’ A small group of 116 people travelled. It was a great success. In Lourdes, they joined 150,000 people from all parts of the world, and were the only country to display a national flag. Eight years after the hasty retreat from Lourdes by the Ozanam Pilgrimage of 1939, Ireland’s connection to the shrine was back on track.