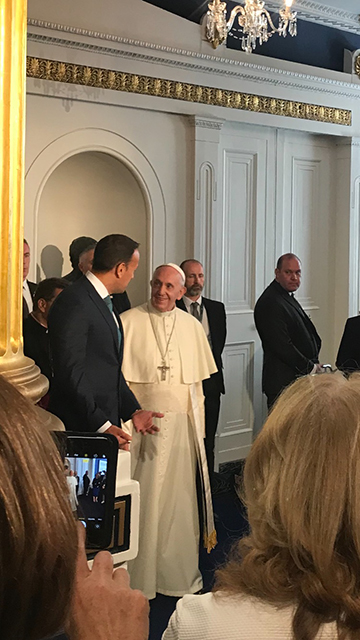 The need for a more just social order by Pope Francis in Dublin Castle today has been welcomed by Society of Saint Vincent de Paul (SVP).

Kieran Stafford, SVP National President, who was among the 300 invited guests in Dublin Castle, said that the Pope’s call for a more just social order and his awareness of the most vulnerable in our society was very welcome. “The Pope’s reference to the gap between rich and poor, his acknowledgement of the struggle for many in society and his call for compassion for those on the margin, are very important messages for Irish society today.” said Mr. Stafford.

Mr Stafford also welcomed the specific reference to work of SVP by An Taoiseach Leo Varadkar.

“The visit of Pope Francis to Ireland is very welcome as are his words about dignity justice and solidarity, the principles which underpin the way in which the 11,000 members of SVP provide support for those who seek its help".

During his speech Pope Francis said; “Today as in the past, the men and women who live in this country strive to enrich the life of the nation with the wisdom born of their faith.

Even in Ireland’s darkest hours, they found in that faith a source of courage and commitment needed to forge a future of freedom and dignity, justice and solidarity.

The Christian message has been an integral part of that experience, and has shaped the language, thought and culture of people on this island.”