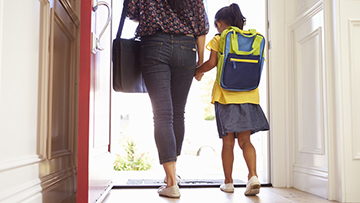 Housing and childcare costs combined with low income to blame

A new report from the Society of St Vincent de Paul (SVP), entitled Working, Parenting and Struggling, has found that the rate of in-work poverty among lone parents more than doubled between 2012 and 2017. In 2012, 1-in-11 working lone parents were living below the poverty line, but by 2017 this increased to 1-in-5.

SVP says that the analysis presented in the report reflects the experience of its members’ who are meeting more and more working families struggling to make ends meet.

The data also shows that the living standards of lone parents in Ireland are among the worst in Europe as they have the second highest rates of income poverty, persistent poverty and severe deprivation among EU-15 peer countries.

SVP Social Policy Development Officer and author of the report Dr Tricia Keilthy said “It is clear that Ireland is failing to protect lone parents and their children from the adverse affects of poverty. High housing and childcare costs combined with low levels of income, mean that it is very difficult for many families with children to make ends meet.  These factors significantly reduce the standard of living of working lone parents, who face additional challenges as both the primary earner and primary care-giver for their families.They also create additional barriers to employment for those who want to take up a job or increase their working hours”.

The report analyses data from the European Survey of Income and Living Conditions, the Labour Force Survey and Department of Employment Affairs and Social Protection to build a comprehensive picture of the income, work and living conditions of one parent families in Ireland.

Some of the main findings include:

SVP National President Kieran Stafford said “This year SVP is marking the 175thanniversary of our foundation in Ireland.  Irish society has changed beyond recognition since the first SVP members began their work in Dublin in 1844, however, many of the same issues of poverty; low paid, precarious work and poor quality housing persist for the people we assist. Our members see the strain on working lone parents who are trying to combine spending time with their children and meeting their caring responsibilities with jobs which can be inflexible and insecure, and often do not provide a sufficient income to meet all of the household needs”.

Dr Keilthy concluded “Budget 2019 included a number of welcome improvements in income supports for lone parents and the introduction of the Affordable Childcare Scheme is a very positive development. But this report shows Ireland has a long way to go in creating pathways to sustainable, decent and family friendly employment which will address the growing issue of in-work poverty among lone parents. We are hopeful that the forthcoming National Action Plan for Social Inclusion (2019-2025) will include ambitious targets for reducing poverty among one parent families, which are linked to supporting actions across Government particularly in the areas of housing, childcare and employment.”