St. Colman’s Conference was founded in 1938. The parish Priest of Macroom at the time was Canon Barrett who was left the proceeds of the sale of a house by a retired RIC Officer by the name of Con Lynch. The legacy was for the establishment of a Conference of the Society in Macroom. Canon Barrett called a meeting, and the following officers were elected; President: J.M Fitzgerald, Treasurer: Dan Murphy, Secretary: Paddy Desmond.

The new Conference was affiliated to the North Cork Area.

In 1987 the President of St. Colman’s realised that the geographical area around Macroom was much too large for one Conference to service, so steps were taken to establish smaller Conferences in outlying parishes. As a result, Ballyvourney was established to cover Clondrohid, Carrignaima and Kilnamartyra. Naomh Ronan covered Ballingeary and Inchigeela. Kilmurry covered Cloughduv, Canovee and Aherla/Ovens and Aghabullogue covered Coachford and Rylane. The reduced-in-size Macroom Conference covered Macroom town, Ballinagree, Rusheen and Kilmichael. Cork Regional President Mr. Jack Barriscale decided it was now time to establish a new area to include the newly created Conferences as well as Blessed Virgin, Bandon, with Mr. Gerry Holland replacing Mr. J.R Dowling as President. The new area to be known as Mid Cork, with Sean O’ Leary of Macroom Conference as Area President. 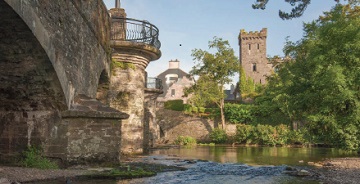 In the early years of the Macroom Conference, there were no females allowed to join until in 1974 when Noelle Moylan and Maureen O’ Leary were invited to join. There are now more females than males in the Conference.

To mark the 50th anniversary of the establishment of the Macroom Conference a celebratory mass was held by Most Rev. John Magee, Bishop of Cloyne, in Macroom church on the 20th May 1988. The National President of the Society, Mr Frank Cox, gave the homily. He was the first lay person to do so in Macroom church.

Another important date in the history of Macroom Conference was the celebrating of the 150th anniversary of the Society in Ireland. It was marked with the first concert to be held at the internationally known Green Glens Millstreet on the 20th March 1994, featuring Cara O’ Sullivan (soprano) & Bridget Knowles (contralto) with the Cork Youth Orchestra under conductor Conor O’ Ceallachan. A superb night of music and song was enjoyed by the large crowds from Cork and Kerry who attended.

To raise funds for the Ethiopian Famine Relief, the Conference chose a ballroom that had been closed for many years. With the goodwill of the owners, the Kelleher family of Kelleher’s garage Macroom, the Montrose Ballroom was made available to us. A once-off license was procured, and as soon as the fire officer was satisfied with the safety aspect, it was “full steam ahead”. Joe Mac and the Dixies were booked for the once-off opening of a much-loved ballroom, supported the “Lee Sound”, on the 19th January 1985. The crowd was so large that all doors had to be opened as a safety precaution. A pleasant footnote is that a local anonymous person paid the full cost of the band on the night.