Story of the quietest, littlest-sung heroes in the country 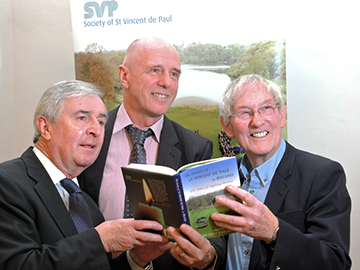 “The Society of St Vincent de Paul (SVP) volunteers fill bellies and warm houses but they also try and lift heads and spirits, and restore a sense of self-worth to the people it helps. This makes them the quietest, littlest-sung heroes in every town and village in the country.”

This is how SVP is described by writer and broadcaster Fiona Looney in the Foreword to a new book about the Society, which celebrates 170 years in Ireland this year.

Entitled “The Society of St Vincent de Paul in Ireland -170 years of fighting poverty”, it was launched this evening (Wednesday 5th September)  by New Island Books.

In the concluding chapter John Monaghan, long time SVP member and social justice activist writes, “Being poor in the eyes of SVP is not just about being short of money, It can also mean having a physical or mental disability, being sick or old, lonely or illiterate. And the poor also include those who are made to feel alone and unwanted – for example immigrants, asylum seekers and migrant workers who sometimes find themselves among others who are indifferent or even hostile. Being poor can also mean being a prisoner, an alcoholic or a drug addict.  No work of charity is foreign to the Society’.”

These two contributions alone sum up the work, ethos and mission of the Society but in between the history of the SVP and its work in Ireland is recorded and illuminated through personal recollections of members.

The contributions illustrate that although the changing nature of poverty constantly requires new and flexible forms of response by SVP, it is through the actions of ordinary people that the spirit and vision of the Society endures.
This book explains how SVP came to play such a major part in Irish life and how, through many turbulent periods and change. It shows how it has remained true to its ethos and values while providing practical help to those most in need, how it continues to be a pivotal organisation in the lives of so many Irish families and at the same time driving the fight for social justice.

The cover of the book shows the letters SVP formed by pupils from schools around the country engaged in an SVP North East Youth for Justice day in April this year.

“These pupils represent the bright future of this organisation and will continue its legacy for generations to come.” said Geoff Meagher, SVP National President.

AVAILABLE IN ALL LEADING BOOKS STORES NOW! IT WOULD MAKE THE PERFECT CHRISTMAS GIFT