The Society of St Vincent de Paul (SVP) will be asking the next Government to follow the example of Canada, Scotland and New Zealand and introduce a Poverty Reduction Act. 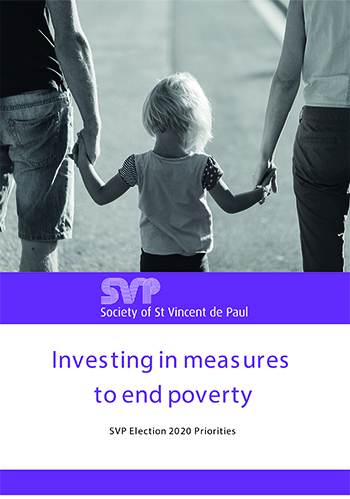 In its Election 2020 Priorities document entitled, “Investing in measures to end poverty” launched today, SVP says that the purpose of this Act would be to make the ambition of the Sustainable Development Goal of No Poverty (Goal 1) by 2030 legally binding.

Dr Tricia Keilthy, SVP Head of Social Justice said, “With rising living costs, the housing crisis and a high number of people living on low incomes, our economy isn't working for everyone and many are being left behind. Currently, there are almost 700,000 people living below the poverty line.

However, this is not inevitable, and poverty eradication is possible, but it requires well designed policies, resources and political will. Enshrining commitments for poverty reduction into law would send a clear signal that the interests of those most marginalised in society are at the top of the national agenda.”

The Act we propose would require the Government of the day to:

Kieran Stafford, SVP National President said “As an organisation that has been providing supports to households in need for over 175 years, we want the next Programme for Government to take decisive action so we can see an end to poverty once and for all.  It won’t be easy and will require making difficult policy decisions but investing in a more just, compassionate and equal society will reap benefits in the long term, for individuals, families, communities and our wider society.” he said.

The SVP Election 2020 Priorities also outlines a number of actions in four key areas which it is calling on all political party and independent candidates to support.

“Last year we received over 150,000 requests for help and our 11,000 members continued to provide support to thousands of families and individuals in need including with essential household spend such as food, fuel, electricity and education. In our experience, the biggest driver of poverty in recent years is housing costs. At a fundamental level, it is impossible for anyone to find a route out of poverty if they do not have safe, decent and affordable housing. The next Dáil must commit to an ambitious building programme of social and affordable housing, led by the Local Authorities.”, said Kieran Stafford.

SVP is calling on all candidates to take a stand against racism and intolerance. It is also asking candidates to engage with marginalised and disadvantaged voters in their communities to ensure their voices are heard.