SVP deeply concerned as more households going without basics in 2022

Amendment to the Social Welfare Bill to increase welfare supports an opportunity to protect people from further hardship next year, says SVP 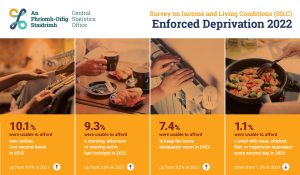 The Society of St Vincent de Paul (SVP) is deeply concerned but unfortunately not surprised by new data from the Central Statistics Office (CSO) which shows a sharp increase in the number of households going without essentials. The Survey of Income and Living Conditions shows an estimated 875,000 people were going without basic items such as adequate heating, nutritious food and suitable clothing in the first half of 2022. This is an additional 184,000 people compared to 2021.

The data reflects the experience of SVP who received an average of 1,200 requests for help every day last week from worried families in the run up to Christmas.  This compared to an average of 800 calls per day at the end of October. Overall, calls to the Charity are up almost 20% compared to last year.

The CSO data shows that one parent families (45.4%), people out of work due to illness or disability (42.7%), those who are unemployed (45.0%) and renters (34.1%) continue to face the highest rates of deprivation. One in five children in the state is now living in enforced deprivation (20.1%).

SVP Research and Policy Officer, Issy Petrie said; “While it is clear that almost everyone is feeling the impact of inflation, this data shows that the most vulnerable households are in crisis. We are really concerned about the continued impact of the cost-of-living crisis on children, one parent families, people living alone, people with disabilities and those who are unemployed. People on low and fixed incomes are clearly at the brink, battling a rising tide of high rents, growing bills, whilst often juggling health conditions and caring responsibilities. It is extremely worrying that the proportion of one parent families who were unable to keep their home adequately warm rose from 7.9% in 2021 to 21.5% in 2022 and that the rate almost doubled for people out of work due to disability (11.4% to 19.5%).  The long-term impact on people’s health and well-being from going without basics should not be underestimated.”

While being in work reduces a person’s risk of deprivation, it does not eliminate it, with 12.4% of people who are employed going without basics, up almost 4 percentage points from 2021. This reflects what SVP is seeing on the ground with more people in low paid work seeking their support.

The Society says that the recent intervention from Government through once-off payments is welcome and will help thousands of individuals and families cope in the coming weeks. However, given the level of price increases experienced in the latter half 2022 and projected inflation for 2023, SVP says these payments do not insulate families from these increases and will not sufficiently protect families in the new year.  As these supports are only temporary, they are very worried that many of these families will continue to struggle into next year and are calling on Government to increase social welfare rates in line with inflation, which would need at least an extra €20 for core rates, rather than the €12 due to be introduced in January.

SVP Head of Social Justice and Policy, Dr. Tricia Keilthy said; “Once-off payments will help people in the short term, and are reassuring for the beginning of winter, but from the new year people have been left with no certainty they will be able to meet costs. One of the best and most effective things Government can do to ensure people can keep the heat and the lights on is to amend the Social Welfare Bill to address the failure to increase rates in line with inflation. It is also vital adequate supports for one parent families, who were overlooked in Budget 2023, are provided. These families have very high rates of poverty and energy deprivation, and we in SVP and as a member of the National One Parent Family Alliance are very concerned about their welfare and are asking for proactive measures to prevent further hardship”.

Jennifer is a volunteer visiting families in Cork. At this time of year, struggling with the costs of back-to-school is the biggest issue. Every year, there seems to be more and more families who just can’t manage it anymore. If not for the support of donors such as you, Jennifer
Cutting back on food to pay for school