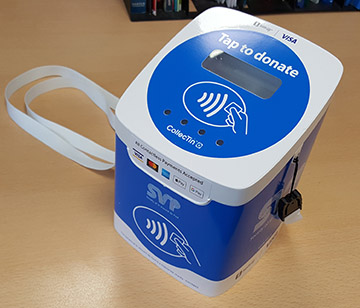 Traditionally fundraising in Ireland is associated with volunteers on the streets, coin buckets in-hand. Yet in an increasingly cashless society that may be about to change.

London-based strategy firm The Future Laboratory has said that Ireland’s tech scene, coupled with its population demographics, will make cash payments a minority in the next five years. Research by the consultancy firm estimates that 440 million people will use contactless mobile payment services across the world this year – feeding a market that will be worth €120 million by 2022.

In Ireland, there has been significant growth in card payments, according to the latest Banking & Payments Federation Ireland report. Contactless payments grew by about 66% year-on-year both in volume terms and in value terms to 158 million payments valued at €1.9 billion.

To address this trend the SVP National Fundraising team decided to test a new contactless donation solution called the CollecTin. The device was developed by SumUp and contains one of their card reader machines inside. Visa sponsored this trial, one of the first of its kind, over a three-month period in 2018.

SVP trialled the CollecTin for ease of use for volunteers and willingness of donors to give non-cash payments.

SVP was provided with five CollecTin devices which included a SumUp Air® card reader and a smartphone with the companion donation app installed. The solution provided an easy way to collect contactless donations with just two actions. The volunteer clicks the donation amount on the mobile device and the donor just taps their card.

The CollecTins were tested at four different fundraising events including a church gate collection, bag pack, raffle and clothes swap, raising over €800 in donations.

Volunteers said they loved the design and ease of use of the CollecTin,
finding the card reader easy to operate and the companion app simple and quick to use.

Based on this positive outcome, SVP have purchased 80 CollecTins for the next stage of trialling with Conferences across the eight regions. To find out more information about how your Conference can be involved in this next stage, please contact your Regional Office or fundraising@svp.ie.

Nichola Mullen, Head of Fundraising, had the following to say:

“Bucket collections by volunteers throughout the country still provide a considerable amount of SVP’s annual fundraised income. To protect this revenue stream, we wanted to move with the times and give donors an option to use their payment cards or devices. We were delighted to partner with SumUp and Visa for this trial. We were unsure how donors would respond given that we were one of the first charities to trial this, but the engagement far exceeded our expectations!”

“Events with older donors still showed a preference for cash donations but when we trialled them at events with younger donors, the engagement was far higher. For example, at a raffle held during a tech company’s Christmas market day, almost 50% of the donations received were through the contactless CollecTin. This is definitely the way forward for bucket collections and events and we look forward to rolling out the use of the CollecTins to volunteers around the country.”