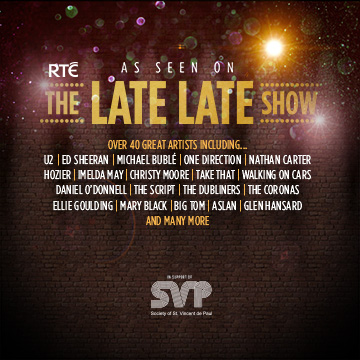 All artist, labels and RTÉ to donate their profits

One of the highlights of the album is the absolute one-off, never to be repeated version of Big Tom’s Four Country Roads featuring the man himself singing alongside the cream of Irish country music including: Daniel O’Donnell, Nathan Carter, Philomena Begley, Sandy Kelly, The Three Amigos, Mike Denver, Dominic Kirwan and TR Dallas to name just a few.

The second CD features some of the biggest acts in the world who have appeared on The Late Late Show in the last ten years including U2, Michael Bublé, Robbie Williams, Ellie Goulding, One Direction, Josh Groban, The Script, 5 Seconds of Summer, and Ed Sheeran’s ‘as Gaeilge’ version of his hit ‘Thinking Out Loud’.

For digital buyers, the album will feature a specially commissioned Christmas track – Finbar Furey, RTÉ Cor na nÓg and the RTÉ Concert Orchestra have teamed up on a unique version of the classic “Little Drummer Boy”. The track will also be released as a charity single in December, in time for the festive season.

The CD will be available in all good record shops and available for digital download from Friday, November 11th.

The Late Late Show host Ryan Tubridy said: “Ever since Gay first stepped onto The Late Late Show set so many moons go and right through Pat’s time at the helm, continuing to the present day, music has been a regular and critical part of the show’s equation. We have had the good fortune to welcome some of the best musicians that this country and, indeed, the world has to offer. We hope this CD reflects The Late Late Show’s rich musical heritage. The St Vincent de Paul is an incredibly impressive charity and a very worthy cause and I hope this CD will help them in their work”.

The Late Late Show, led by the show’s music supervisor Dermot McEvoy teamed up with Universal Music Ireland to put together a double album of music performed and featured on the programme.

Album Producer Dermot McEvoy said: “We had an embarrassment of riches when it came to putting together this project. So many artists agreed to take part that we could have made a quadruple album! We have tracks on this record which cannot be found elsewhere, so it's a special and unique collection”.

All artists and labels involved are joining RTÉ in donating their profits from the sale of the album to St Vincent de Paul.

SVP National President Geoff Meagher said: "This CD provides a very unique opportunity for people to help SVP provide support for those in need in communities throughout the country. SVP members visit thousands of individuals and families in their home environments to help those who need financial and emotional support at difficult times in their lives.  Unfortunately for many people visited today their living environments are not their homes but hotels and B&Bs. The generosity of the Irish people is essential for this work. The funds raised will benefit and make a real difference to so many in need”.

This unique double album has been made possible through the generosity of the acts and labels involved, particularly Universal Music Ireland.

“When we were approached about “As Seen On The Late Late Show” in early summer, it was without question a project that we would lend our support to,” said Mark Crossingham MD of Universal Music Ireland. “Apart from the diversity of musical acts that have performed on The Late Late Show, the fact that the music was of superior quality to be able to have it captured on audio for release, makes for great listening. Coupled with the great work of St Vincent De Paul and what their volunteers provide - they make a difference. We were honoured to be involved”.