The Life and Legacy of Noel Clear: Social Justice Champion 1937-2003 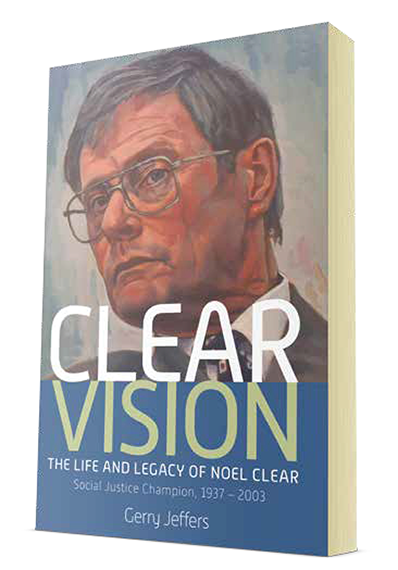 A new book on the life of former SVP National President Noel Clear is to be published this month. Written by Gerry Jeffers it will be published by Veritas Publications. It is an excellent read and demonstrates the positive impact Noel Clear had on today’s SVP.

The book will be launched by Catherine Byrne TD, Minister for Health Promotion and the National Drugs Strategy at Richmond Barracks, St. Michael's Estate, Inchicore, Dublin 8 on 16th November at 7:00pm. All are welcome. Please RSVP by November 10th to events@veritas.ie.

Everyone in SVP should be encouraged to buy a copy (or ask someone to buy it as a Christmas gift) to remind themselves of the impact each member can have even as ‘ordinary’  individuals on the lives of others. and the need to continually say  “Could we be doing more or even better “or more importantly " what are we going to do about it now?”
When his friend Noel Clear died in 2003, Gerry Jeffers wrote the following appreciation which was published in The Irish Times and subsequently the SVP Bulletin.

Noel Clear slipped from life on December 8th, aged 65 years, and we are all the poorer for his passing. A gifted organiser, decision-maker and problem solver, Noel also possessed an ocean of compassion. He always looked for the good in people, believed in second, third, fourth and more chances, and never gave up on anyone. Before completing his Leaving Cert. in Westland Row CBS, Noel was already involved in developing a youth club in Keogh Square in his native Inchicore. As a member of the probation and welfare service in the Department of Justice, Noel became a real friend to many young people in trouble with the law. They valued his straight talking, his efforts to find them work and his encouragement to stay away from trouble.

By the mid-nineteen sixties Noel had become the anchor of an energetic group of volunteers from Inchicore and elsewhere who made up a local Conference of the Society of St. Vincent de Paul (SVP). Under the banner of St Vincent’s Youth Centre, activities included club nights, performances of O’Casey’s plays, football teams, summer holidays, Christmas food parcels, literacy classes, The Link magazine, and, eventually, the building of a new Youth Centre. Noel, along with local curate Fr. Brian Power, held things together.

A young Anne Braine from Drimnagh soon brought a fresh vitality to the group. To the delight of many, the busy Noel fell in love. The pair married in 1972 and Anne became Noel’s great pillar of strength, sharing and supporting his dedicated commitment, while together they reared a fine family.

That St. Vincent’s Youth group was keenly aware that many youth problems result from blatant social inequalities. Discussion, analysis and debate often flowed into the small hours. Occasionally letters were written to politicians, government departments, and newspapers. Few showed any interest. When the discourse drifted too far from reality, invariably the grounded, quiet-spoken Noel would issue the challenge: "Yes, but what are we going to do about it now? Hungry people can’t afford to wait for society to improve!"

Noel’s grassroots work in Inchicore became a solid apprenticeship for wider roles within the SVP. When, in 1996, Noel became the SVP’s National President, he set about re-positioning the Society for the challenges ahead. Throughout the economic boom he was shocked continually by the persistence of poverty amid plenty. He sought to engage policymakers in thinking strategically to bring about greater social justice. He was rightly angered to see so many children in poverty, by educational disadvantage, by inequalities in health provision, by the marginalisation of refugees and asylum seekers, and by increased homelessness. Not afraid to speak out, he did so eloquently and coherently, becoming a forceful and credible advocate for voiceless people.

Within the SVP he spearheaded social policy initiatives, promoted a vision of professionalism in a voluntary organisation and increased youth activities. He travelled the length and breadth of the country to listen to and talk with members, to share his vision of a practical Christian organisation bearing food vouchers in one hand and coherent social justice policies in the other.

On top of his work with the probation service and his massive voluntary input to the SVP, Noel was also deeply committed, since his schooldays, to Irish language and culture. Despite his busy life outside the home, Noel was very much a family man, a loving and committed husband and father. Watching Noel’s final year unfold was a moving lesson in love, as husband, wife, and three sons dealt with illness and with each other, with such care and affection.

Noel’s life of service was the practical expression of a strong Christian belief. To have known him, to have been his friend, was a wonderful privilege. He died wrapped in the loving care of Anne and their sons Rory, Alan and Conor. For them, for his brothers Seán and Tony, and for thousands of others, Noel’s passing leaves a void that cannot be filled.