The SSE Airs have high hopes for charity concert in Dublin 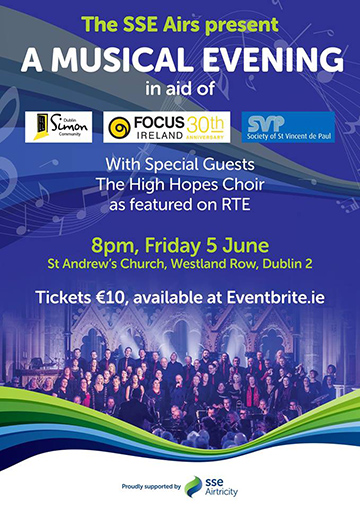 The SSE Airs, SSE Airtricity’s workplace choir, will be performing alongside special guests the High Hopes Choir, at a concert at St. Andrew’s Church in Dublin on Friday 5 June. The event is sponsored by SSE Airtricity and all proceeds will go to the Dublin Simon Community, Focus Ireland, and the Society of Saint Vincent de Paul. Tickets are now available for €10 at eventbrite.ie.

Special guests the High Hopes Choir are the first Irish choir composed entirely of people affected by homelessness. The group aims to help change the public perception of homeless people in Ireland and raise funds to combat the homelessness cycle. The choir recently featured in a popular RTÉ documentary, and have captivated audiences in Dublin and Waterford with their performances.

Like the SSE Airs, the High Hopes Choir sing a mix of pop, traditional and choral music, so there will be something for everyone in the audience.

Employees from across SSE Airtricity make up The SSE Airs, with a blend of basses, tenors, altos and sopranos. The choir have been performing together for two years, and recently won competitions at the RDS Feis Ceoil and AIMS New Ross Choral Festival.

Professional choir conductor, Ruaidhrí O’Dalaigh, who has been working with the SSE Airs since their foundation, said: “The most important thing is that people come out and support this event, because it’s about raising money for three fantastic charities. I also want it to show the buzz and camaraderie that can come from singing in a choir. I honestly think it’s something everyone should try. The High Hopes Choir are an inspiring group, and their progress just goes to show the power that singing can have. Whether amateur or professional, singing is ultimately about enjoyment, and that’s what we want to get across.”

The concert kicks off at 8pm sharp on Friday 5 June at St. Andrew’s Church, Westland Row, Dublin 2. To buy tickets, or for more information, visit eventbrite.ie.