We are a rich country but thousands still below poverty line 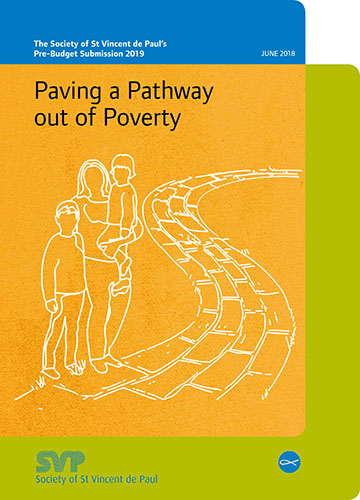 It is unacceptable that as the fifth richest country in the world, Ireland still has over 16% of its population (780,000 people) living below the poverty line, according to the Society of St Vincent de Paul (SVP).

At the launch of ‘Paving a Pathway out of Poverty’, the SVP Pre-Budget Submission launched today (12th June 2018) SVP National President Kieran Stafford said that what is particularly stark about the level of poverty is that 70,000 more children are growing up in poverty compared to 10 years ago. He also said that SVP now receives double the number of calls for assistance than it did in 2008.

The SVP’s ‘Paving a Pathway out of Poverty’ contains 35 practical proposals which SVP describes as incremental steps, that if implemented, would have a positive impact and help pave a way out of poverty for hundreds of thousands of people.

The Society says that Budget 2019 needs to reflect a real commitment to tackling poverty in all its forms and requires:

Kieran Stafford said, “Poverty is not inevitable, and its eradication is possible, but it requires well-designed policies, resources and political will. Poverty not only hurts the individual affected; it hurts communities, it hurts the economy, and it hurts society.”

He also said that the negative social and economic costs arising from the recession are still apparent to members of SVP throughout Ireland. 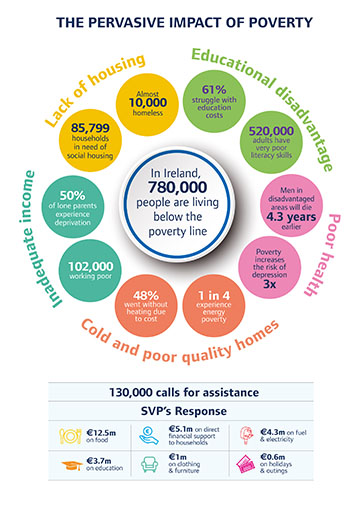 Mr Stafford says that SVP strongly believes that the measurement of our country’s success should not just be based on economic growth. “A functioning economy means having an adequate social protection floor that meets everyone’s basic needs and where no one suffers enforced deprivation. It means having access to decent jobs. It means having equal access to quality housing, education, childcare and healthcare.” he said.

Dr Tricia Keilthy, SVP Head of Social Justice said that over the medium term, SVP is calling on Government to publish, resource and implement the new National Action Plan for Social Inclusion. “This means the fight against poverty needs to be prioritised on an ongoing basis, at all levels of Government, so that Ireland meets its commitments under the Sustainable Development Goals to eliminate poverty by 2030,” she said.