We remember the late Michael O’Keeffe 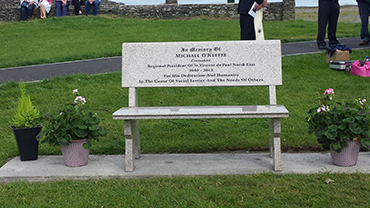 On the second anniversary of the sad passing of the late Michael O’Keeffe members gathering in great numbers to recognise the high esteem Michael was held in.  Michael was so well thought of, laying solid foundations across the region which has seen the NorthEast & Midlands region grow from strength to strength.

Regional President Liam Reilly spoke of Michael’s enthusiasm, commitment, passion and legacy. He acknowledged Michael’s contribution to the Society locally, regionally and nationally.  These sentiments were echoed by Kieran Stafford, National Vice President who reminded us of Michael unassuming personality and his commitment to those in need.
Fr Andy Doyle, a personal friend of the O’Keeffe family facilitated in the Park Bench blessing adding some very personal thoughts and prayers for Michael.  Prayers of the faithful were read by various members and volunteers across the region.  Beautiful music was added by Noel King.

The Park Bench illustrated below is situated in the peaceful Lloyds Park (also known as the People’s Park) in Kells and is a lasting memory to all volunteers who have given of their time and talents.

Throughout his 5 years as Regional President Michael spearheaded a number of initiatives that have left a lasting legacy and are the essence of how best to succeed.  Michael also played a pivotal role in development of the recent re-structure of the Society. His dedication and determination for those less well-off in society – you will be forever in our thoughts and prayers.
Our thanks to Gillian O’Rourke Meath West Area President, Alan O’Rourke Regional Treasurer and Mary Lydon, Kilskyre Conference President for organising the ceremony.

As 2015 is the 150th Anniversary of W.B Year’s birthday we remember one of Michael’s favourite poems – The Lake Isle of Innisfree.

The Lake Isle of Innisfree

I will arise and go now, and go to Innisfree,
And a small cabin build there, of clay and wattles made;
Nine bean rows will I have there, a hive for the honeybee,
And live alone in the bee-loud glade.
And I shall have some peace there, for peace comes dropping slow,
Dropping from the veils of the morning to where the cricket sings;
There midnight's all a-glimmer, and noon a purple glow,
And evening full of the linnet's wings.
I will arise and go now, for always night and day
I hear lake water lapping with low sounds by the shore;
While I stand on the roadway, or on the pavements gray,
I hear it in the deep heart's core.